The Aero company, established in a Prague suburb, built sports planes and (from 1928 onwards) small sports cars.  The Aero 10 was powered by a one-cylinder two-stroke 499 cc engine delivering 10 bhp at 2700 rpm.  This was succeeded by the Aero 20, the Aero 30 and finally the Aero 50 with a four-cylinder engine that consisted of two cylinder blocks.  The Aero 30 was the most successful model.  During the war, two more prototypes were built at Aero, the Pony and the Record.  The models were never taken into production, however.  By order of the new government, Aero had to restrict itself to building aeroplanes. 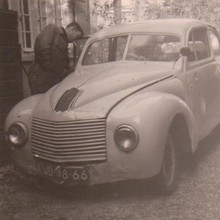 Suggest a link relating to Aero