As an ever increasing number of new motorists take to the roads every year, traffic jams become more prevalent. Most of us just sit and accept these as one of the many curses of the modern world. Others try to formulate a solution with seemingly outlandish ideas, such as sprouting wings and flying over and away from the problem.

One man, Moulton B. Taylor [Molt to his friends] devoted almost half a century of his life trying to bring that very idea to fruition.  Born in Portland, Oregon on the 12th September 1912, Taylor graduated in Aeronaughtical Engineering at the University of Washington in 1935, but joined the U.S. Navy's aviation cadet programme due to lack of work in his particular field. This enabled him to fly a variety of aircraft and when his contract expired in 1939 he started Airphone Products, a small business manufacturing aircraft radios of his own design.  This came to an abrupt end when he was recalled to duty as a Naval Reserve to work on the Navy's missile programme shortly before the start of the war with Japan in 1941.  On his return to civilian life in 1946, he and a few friends decided to produce a small 2-seat amphibian called the 'Duckling'. However, this design was put aside when Taylor was inspired by the sight of Robert E. Fulton's 'Airphibian' which was basically a small road going vehicle that could be transformed into an aircraft by adding a detachable 'fixed' wing and fuselage assembly.

Taylor was impressed with the original idea, but didn't like the way that the detached wings took up an aeroplane space when left at the airfield. He envisaged a detachable aircraft component that would fold into a towable trailer or garaged when not in use, using a minimum of floor space.

He called it simply the AEROCAR.

Already heavily involved with the sale of plans and D.I.Y. light aircraft components, he became obssessed with his new project and work on the AEROCAR began.  In February 1948 a quarter scale model was passed over to the Aeronaughtical Laboratory at the University of Washington for assessment and a full scale prototype was started in July 1948.  In early 1949, he sold shares in a proposed company and built a factory, with offices and a grass airstrip on a plot of land in Longview, Washington State which became AEROCAR Incorporated.  Nine months later in October 1949, the first AEROCAR prototype was ready for it's initial testing, both as a car and as an aircraft.  The car component consists of a fully functioning 2-seat road car constructed from fibreglass sheeting over a steel and aluminium frame.  Two normal size car doors are fitted.  A three spoke steering wheel, used both on the road and in the air, is positioned on the left hand side of a dashboard that carries all the instruments and switches applicable to both road going use and as an aircraft.  Two seats are arranged side by side in the very narrow cabin and the divided front windscreen is fitted with wipers.

The AEROCAR Model I's had drum brakes to all four small diameter road wheels that are used for stopping both as a car and as an aeroplane.  Normal head and tail lights using a 12 volt system are fitted for road use and the horn becomes a stall warning indicator when used for flying.  This results in the horn blowing a few times during the landing process.  Uniquely, the rear mounted engine, with it's three speed 'crash' gearbox, drives the front wheels and this is due to the rear wheels being used for take-off and landing.

The aeroplane attachment has folding wings that fasten to the sides of the long tapering fuselage, which has a 'Y' shaped [or butterfly] tail with a two blade 'pusher' propeller at the end. Two very small wheels positioned in each of the leading edge wing tips allow the whole assembly to be towed, tail first, behind the car. These wing tip wheels were later made retractable.   The length of the fuselage necessitated a propeller shaft approximately 10 feet long to connect the engine in the rear of the car to the propeller and this gave possibly the most critical problem of the many encountered in the design - power pulses as the shaft rotated.

Several ideas were tried without success until Taylor read of a French idea called a 'Flexidyne' which is a dry fluid coupling in the form of tiny steel shot that packs into a near solid mass in use. Incredibly, it was being manufactured in America and this eventually solved the problem.

To assemble the wings and fuselage to the car, the cover that holds the rear number plate has to be lifted in order to locate the long propshaft onto the splined shaft that protrudes from the rear of the engine.  The fuselage then fastens to the body at two points and until this is assembled correctly, it is impossible to start the engine

When assembled securely, the rudder pedals, which lie on the floor during road use, rise into position each side of the normal pedals and the front brakes are automatically isolated from the braking system.  Over time, with practice, the whole assembly can be carried out by one in a few minutes.

The prototype AEROCAR Model I had a 135hp Lycoming 0-290 engine that was followed by a pre-production prototype with a 143hp Lycoming 0-320 engine with which the AEROCAR's airworthiness certificate was granted by the CAA (Civil Aviation Authority) on the 13th December 1956.

Taylor was given approval to build up to twelve more AEROCAR's for sale to chosen private owners throughout the United States who would then be monitored as further experimental trials.   But only four more AEROCAR Model I's were built and these were available for immediate sale at $25,000 each.

In 1961, Taylor arranged with Ling-Temco-Vought, based in Dallas, to build 1,000 AEROCAR's. To cover the cost of tooling necessary, a firm order of at least 500 would be required, but unfortunately just under half that number paid their deposit and the deal fell through.   The 'AERO-PLANE' followed the Model I's and this became known as the AEROCAR II,  although it was purely a flying machine.

Taylor was always aware that the car component would be the troublesome part of the AEROCAR because of the constantly changing automobile styling trends and the very strict American safety requirements.  With the Model I car component now looking very dated in it's design, Taylor decided that something quite a bit more that just a 'facelift' would be required.   He bought back one of the early Model I's that had been involved in an accident and set about restyling it and adopting more innovative features.  He used the 143hp Lycoming 0-320 engine.  The new full width two door body was more sleek in appearance, with a front that resembled the Jaguar e-type styling on a very much smaller scale.

He called this one the AEROCAR III.
The four road wheels were made to retract and had three positions.
1. Fully extended for take-off and landing and attaching the wings/fuselage assembly.
2. Partially retracted, giving better stability for normal road use.
3. Fully retracted for flying.

The landing gear had independent torsion bar springing, hydraulic shock absorbers and front disc brakes.   A new towing system was fitted and improvements were made, such as flush rivets and a better fit of fuselage to the car body. The propeller was moved further away from the tailplane to improve propeller afficiency and reduce noise. A larger fuel tank of 32 gallons gave a flight range of up to 500 miles and a new method of dampening the drive shaft noise using rubber was being tested.  The interior has deep pile floor covering and a console fitted between the two bucket seats that carry's the gear control and ash tray. Arm rests are fitted and a walnut rim steering wheel fronts a foam padded instrument panel with walnut inlay.  Two speed wipers, dual washers and dual interior defrosters are fitted and the doors have large pockets.

August 1970 saw the Ford Motor Company showing interest in AEROCAR III, but the oil crisis and the escalating number of Japanese car imports into America put an end to further negotiations and only one AEROCAR III was built.

Sadly for Taylor, circumstances dictated that what has to be the most advanced and practical flying car to date would never actually go into production. But the fact that the AEROCAR's had been proven and had hundreds of flying hours to their credit was testiment to the thought and inventiveness of one of the best engineering brains ever to undertake an answer to the traffic problem.

Despite suffering two strokes, Molt Taylor started the design of AEROCAR Model IV using a Geo Metro car for the car component and a second engine to power it as an aircraft.

In November 1995, Molt Taylor was inaugurated into the Hall of Fame by the EAA [Experimental Amateur built Aircraft] but the excitement of the occasion was too much for him and he suffered his third and fatal stroke aged 82.

All five road-going AEROCAR's still exist, either in the hands of private collectors or in Museums, but only one is flying at this time.  At least two have been re-painted and one was converted by Taylor into an AEROCAR Model III making it a little difficult to identify some of the AEROCAR's seen in photographs.

The non-roadable aircraft produced by the company in kit form benefitted from the AEROCAR design.

An amphibian called the 'Sooper Coot' has a high mounted engine over the cabin and permanently attached wings that fold as on the AEROCAR, allowing it to be towed tail first behind a car.

The 'Mini-Imp' and 'Micro-Imp' has the same permanently attached folding wings, a long fuselage and 'pusher' propeller with an inverted tail.

Although Molt Taylor's AEROCAR IV was stopped in the design stage, the AEROCAR name was to be continued in 1999 by American Ed Sweeney, owner of the only flying AEROCAR Model I (N102D) who has the idea of adopting a Lotus Elise as the car component for his AEROCAR 2000.

The following information is submitted by a contributor to Motorbase

It was not Fulton's concept that so impressed Molt Taylor that he,Taylor, would decide to build a flying car.

When Taylor came to Longview WA after WWII, his plan was to build an Amphibian,the Duckling. In search of a licensed A&E man which he would need, he met Jess Minnick but, he, Jess, was not interested in Taylor's Duckling project/idea. However,during their discussion, Minnick shared his idea and his picture for a folding wing design for a flying car. Taylor was impressed. He asked Minnick if he would like to build something like that, the answer was, "all my life I wanted to"... The rest is history! Molt Taylor would be the Promoter, Jess Minnick would build it ~ It was called "Aerocar" .

About Jess Minnick ~ EAA's membership magazine, Sport Aviation, wrote;
"Jess (Minnick) was a remarkably skilled designer and builder of systems and always came up with extremely clever ways of making complex components like the Aerocars folding wing and removable tail cone work well." AND, "The Aerocar became a lifelong obsession with both Molt (Taylor) and Jess (Minnick) and they were a perfect team." 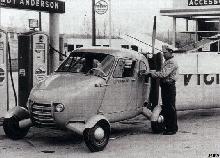