With a background dating back to the 17th century the Alldays & Onions Pneumatic Engineering Co of Birmingham was a major supplier of equipment and tools to blacksmiths and foundries – the pneumatic in its title referring to the manufacture of bellows. After exhibiting a motorcar of considerable complexity (rear engine, shaft-driven gearbox at the front and belt final-drive) in the latter part of 1899, and a quadricycle, the first production Alldays motor vehicle was in 1900; a tandem-seated 'Traveller' voiturette with wheel steering from the back seat and a rear-mounted 2¾hp De Dion-Bouton engine.

A conventional single-cylinder car with shaft drive was introduced in 1903, followed two years later by a very successful two-cylinder 10/12hp model that remained in production until 1913.

Alldays acquired Enfield in 1908 and several subsequent cars of each make had identical mechanical specification. Enfield car production faded away in the 1920s. 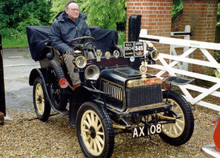