Amazingly, the name ALTA was a contraction of Alberta, a name that the founder of the company, Geoffrey Taylor had read about and liked the sound of.

Born in 1904, Taylor started producing small quantities of car and motorcycle components such as pistons and valve gear in the early 1920's, mostly for local firm A.B.C. Motors Ltd.

He commenced building his first car in the stables of his father's house at Kingston Hill, Kingston-on-Thames, Surrey in 1928. He fabricated his own engine of 1,074cc with aluminium block and shaft driven twin camshafts and mounted it in an old A.B.C. chassis frame.  Registered PK4053, the car was completed in 1930 and Taylor won a bronze medal, driving it in the London to Lands End Trial.

The design was developed and production started in 1931 using his own engines and chassis's supplied by Rubery Owen.  The production cars had open two-seater bodies and sharply raked radiators. With speed rather than comfort being the main priority, they could achieve 85mph un-blown, or 110mph with a Roots-type 'blower'.

Renowned for their acceleration, ALTA's were used in trials, sprints and races and one broke the record for the Brooklands mountain circuit in 1934.  A number of side-lines, such as aluminium cylinder heads for Austin Seven's helped with expenses.

In 1935, the 1,074cc engine was joined by versions of 1,496cc and 1,961cc, with chain driven camshafts and ALTA moved into single-seater racing cars, eventually challenging the E.R.A. supremacy on the racing circuits. 1937 saw the introduction of a 1,496cc 'special supercharged racing model' with independant coil suspension.  ALTA made a considerable reduction in the car's weight which contributed to many ALTA successes.

WWII put a stop to serious car development and the company made prototype aeroplane components, airframe parts, jigs and tools.

After the war, Taylor had plans for a new Grand Prix car, but material shortages and other delays meant that by the time it was ready in 1948, it was already outclassed by the competition.

Subsequently, Taylor gave up making racing cars, but the ALTA name continued through the engines that they supplied to Connaught and H.W.M.

Geoffrey Taylor died in 1966 after a long illness. 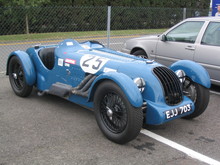 Suggest a link relating to Alta