AMERICAN BANTAM 1935 - 1941
When Sir Herbert Austin of Birmingham, England introduced his Austin 7 to America in 1930, the initial response with orders for 180,000 was encouraging.  But the great depression hit America at the same time and resulted in sales of only 8,558 cars. The company, based in Butler, Pennsylvania, was to have even worse sales the following year and production ceased in 1932.  Roy S. Evens, a well established Oregon car dealer, who had a seven state chain selling Willys - Overland, Lincoln, Hudson and the American Austin, bought the company, together with all its debts and sold off the remaining stock through his own outlets at a greatly reduced price. When all were cleared, the American Austin Company was put into receivership in 1934 after selling less than 20,000 vehicles.  But the dynamic Evans had other ideas and after discussion with the Federal court dealing with the bankruptcy, they decided that he had the drive and ability to reorganise the company. He was allowed to take over American Austin, worth an estimated $10 million for a mere $5,000.  He managed to secure a huge loan from the Reconstruction Finance Company and began work on a new car of similar size to the Austin that he called the American Bantam.

The new design was again put in the hands of Count Alexis de Sakhnoffsky, who had designed the American Austin and he based his revised styling around the original American Austin body shells. The front grille was given a more rounded shape and the wings were more in keeping with American ideas of the time. Sakhnoffsky's bill was an incredibly low $300 and with tooling costs of just $7,000, work on the American Bantam started in 1935. Evans' own engineers made alterations to the engine, with the exception of the manifold, which was designed by Harry Miller, a talented engine builder, famous for his highly successful Indianapolis racing cars and engines in the 1920's and 30's. The cubic capacity remained the same as the original, but there were now three main bearings instead of two. White metal bearing shells were used (known in America as Babbitt bearings, after the inventor of the metal first used in 1839, - Isaac Babitt). These replaced the expensive roller bearings used on the Austin and full pressure lubrication was adopted.  The compression ratio was raised from 5.0:1 to 7.0:1 and the horsepower
increased to 20 bhp. There was a new three speed, plus reverse, transmission with Hotchkiss final drive. Performance and economy were much improved. The chassis of the new car was much stronger than that of the Austin and as a consequence, was quite a bit heavier.  However, there were so many differences with the Bantam, mechanically and structurally that the original licence to produce it in America no longer applied, although a link with Austin, England continued.

The new design was quite attractive and would have been very much appreciated in England where it could easily have given the English Austin serious competition on its home ground. But Evans' ultimate goal was to present a car that would seduce the American motorist into buying one, possibly even for use as a second car and he had to overcome that challenge to survive. The new car made an appearance at the New York Auto Show in late 1937. One Modification carried out that year was a reduction in wheel size from 18" to 16" diameter.  In 1938, the Model '60' was offered for sale, with a further reduction in wheel size to 15". A sales target of 18,000 vehicles was set.

The total number of 1941 cars built was 138 and production was discontinued.
The original target of 18,000 cars was way-off with a disappointing total of only around 2,000 vehicles of all types being built.

But America was on the verge of being drawn into WWII, already raging in Europe and the American Government cancelled civilian car production to concentrate on the war effort. The American Bantam company had loaned three standard roadsters to the Pennsylvanian National Guard to eveluate for possible use a sreconnaisance cars in 1938 and although they performed satisfactorily, official reports were not forthcoming. But the American Government had already begun investigating the design specification for a small 4 x 4 vehicle that could benefit all branches of the armed forces. It was given the name 'General Purpose' (GP) and some feel that the initials gave rise to the now well known 'Jeep.' Others believe that the name came from a Popeye cartoon character, 'Eugene the Jeep.' A further version is that it was coined by a Willys test drive who wished to differentiate between the Willys and Ford versions. The practicality of a small all-terrain, multi-purpose vehicle became evident on muddy crater covered battlefields where normal trucks were constantly put out of commission because of their size and weight.

In June 1940, a special U.S. Army sub-committee visited the Bantam plant in Butler. Several production Bantams were tested, again with positive results and the specification for the new vehicle was drawn up. Although the parameters of the proposed vehicle had been formulated with the Bantam company, the Government gave other interested companies permission to submit competitive bids, a challenge that was taken up by Willys and Ford who came forward with their own proposals. Both companies had been allowed to see tests carried out on the Bantam and both had been allowed to see their drawings, so it was no surprise that vehicles offered by them very closely resembled the Bantam in many ways. All pre-production deadlines and prototypes had been met only by Bantam and the Bantam reconnaisance car (BRC) was chosen. But there was a fear that the production capacity would not be available at the Bantam works and the Government eventually turned to the Willys design, the bulk of the orders finally being divided between Willys and Ford.

Bantam were relegated to making trailers for the Jeep. The name 'Jeep' was taken up by Willys in the post-war years, giving the impression that they had been responsible for the design.  Just like it's predecessors, the American Bantam was never taken seriously and never really 'took-off.'  Most likely it was the American love of big cars that did it, or did Bantam try to produce too many models too soon, before testing the market with their products? Last minute attempts to give verious models interesting names such as 'Hollywood' and 'Riviera' confused the issue and with Panel Vans, cab-over trucks and pick-ups, it is difficult to put down an accurate list of Bantam vehicles correctly.

It must have been soul destroying to those involved in producing one of the World's automotive Icon's, the Jeep, only to have other well-known, larger companies try to take the credit because the Bantam plant apparently didn't have the capacity for large quantity production. This was found to be an incorrest supposition in post WWII years. 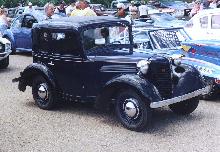