Citeria was a failed attempt by a Dutch entrepreneur to create a new sports car.  The prototype was launched with much hype at the Dutch motor racing circuit of Zandvoort on November 17, 1958 with television coverage and personalities including Stirling Moss, Carel Godin de Beaufort and Hans Hugenholz senior.  The two-seater roadster also had a detachable hard-top and tubular chassis with glass-reinforced polyester body.

The man behind the project, Puck van Beekum, was unable to pay his debts and tried to settle matters with forged cheques.  By the time he had served two and a half years in prison the project was dead. 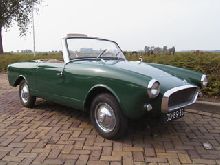 Suggest a link relating to Citeria