The company was originally created as a division of engine builders Crossley Brothers, but from 1910 became a stand-alone company. Although founded as a car maker, they were major suppliers of vehicles to British forces in World War I, and in the 1920s moved into bus manufacture. With re-armament in the 1930s, car-making was run down, and stopped completely in 1936. During World War II output was again concentrated on military vehicles. Bus production resumed in 1945 but no more cars were made. The directors decided in the late 1940s company was too small to survive alone and agreed a take over by AEC. Production at the Crossley factories finally stopped in 1958.

Crossley Motors Ltd was first registered on 11 April 1906 (and re-registered with a different company number in 1910) as the vehicle manufacturing arm of Crossley Brothers. The first car was actually built in 1904 and exhibited at the Paris Motor Show in 1905, but the parent company saw a future for these new machines and decided a separate company was required.

In 1920 Crossley Motors bought 34,283 (68.5%) of the 50,000 issued shares of the nearby A V Roe and Company — better known as Avro. Crossley took over Avro's car manufacturing business but Avro continued its aircraft manufacturing operations independently. Crossley had to sell their shares in Avro to Armstrong Siddeley in 1928 to pay for the losses incurred in Willys Overland Crossley.

After World War II the directors decided that the company was not large enough to prosper and looked for a partner. This resulted in a take over by Associated Equipment Company (AEC). Production of the Crossley range of vehicles continued at the Stockport plant until 1952. After that date the production was of badge-engineered AEC designs until the factory closed in 1958. Although no longer trading, the company was never formally wound up. In 1969 AEC's new owner, British Leyland, restarted the company with a new name – Leyland National – and production of single-decker buses recommenced.

Production was originally in the Crossley Brothers factory in Openshaw, Manchester but in 1907 they moved to a nearby site they owned in Napier Street, Gorton, Manchester. (Napier Street was later renamed Crossley Street).

With the steady increase in vehicle production, the limits of the Gorton site were in turn soon reached, and in 1914 a further 48 acre (194,000 m²) site was bought in Heaton Chapel, Stockport which became the Errwood Park Works. Construction of the new factory started in 1915, and although intended to relieve congestion on the old site, it was rapidly given over to war work. The western half of the site, built in 1917, but only managed by Crossley Motors, became National Aircraft Factory No. 2. In 1919, this factory was bought from the government and became the Willys Overland Crossley plant, but was eventually sold to Fairey Aviation in 1934. In 1938, the eastern side became another aircraft factory, this time managed by Fairey, and after World War II it became the final home of Crossley Motors. Re-armament work caused the search for more space and in 1938 a factory was opened in Greencroft Mill, Hyde about 3 miles (4.8 km) east of Errwood Park.

Crossley 25/30 hp Tenders were utilised by the British Army in Ireland from 1919 until their withdrawal in 1922. The Irish Army continued to use them for troop transport throughout the Civil War period, but they were worked hard and appeared to have received little care: of 454 originally supplied, only 57 were in service by 1926 with a further 66 being overhauled or repaired. The 20/25 model was also the first vehicle to be supplied to London's Metropolitan Police Flying Squad in 1920 with some being fitted with radio equipment.

Car production resumed after World War I and a new model, the 19.6, was launched in 1921 and joined in 1922 by the smaller 2.4 litre 14hp model that would become the company's best seller. The 19.6 was replaced by the 2.7 litre 18/50 in 1925 fitted with Crossley's first six cylinder engine and this was enlarged in 1927 to 3.2 litres in the 20.9. Crossley were the first British car company to offer a factory fitted car radio in 1933.  Although the large cars would continue to be available, a range of small models fitted with Coventry Climax engines was announced in 1931 but sales of the cars slowly declined and the last ones were were made in 1937.

By the late 1920s the market for hand made cars began to disappear and the company moved into the bus market and launched its first model, the Eagle single decker in 1928. Although some double deck bodies were fitted to the Eagle, the Condor launched in 1930 was the first chassis to be designed for double decker bodies. The Condor could also be ordered with a diesel engine, made by Gardner at first, and became the first British double deck bus to be offered with diesel power. The big selling pre war bus was the Mancunian with first deliveries in 1933. This was available as both a double and single decker.

In addition to cars and buses the company also made goods and military vehicles. At first these were conversions of the car models but starting with the BGT1 in 1923 specialised chassis designs were produced. Two Crossley trucks based on the 25/30 car chassis were from 1924 to 1926 the first vehicles to be driven from Cape Town to Cairo by the Court Treatt expedition.  A range of heavy goods vehicles starting with the 1931 diesel-powered 12-ton payload Atlas was announced but only a few were made as the factory was by then gearing up to concentrate on buses and military orders. From 1936 military production was rapidly ramped up with British re-armament at first with "IGL" models but from 1940 with a four wheel drive "FWD" chassis in both tractor unit and truck form. By 1945 over 10,000 FWDs had been made.

After World War II there was a boom in the bus industry as war time losses needed to be replaced. Crossley won what was then the largest ever British export order for buses with a contract with the Dutch government. By the late 1940s bus orders were decreasing and it became clear that the company was too small to continue as an independent manufacturer and in 1948 they were sold to AEC. The last Crossley chassis was made in 1952, but body production continued at Erwood Park until 1958. 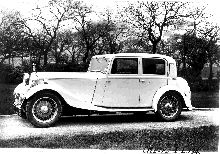 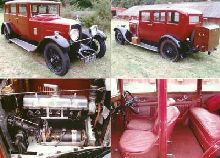 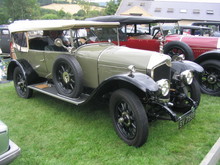 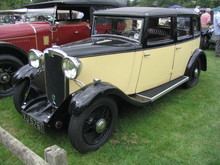 Suggest a link relating to Crossley