Dacia started to cooperate with Renault in 1966 and the main Dacia factory was built in 1968, in Colibaşi (now called Mioveni), near Piteşti.

Dacia acquired the tooling and basic designs of Renault 12. However, until the tooling was ready it was decided to produce the Renault 8 under licence; it was known as the Dacia 1100. From 1968 to 1971, some 37,000 were produced, with a very minor cosmetic change to the front at the end of 1969. Also produced in very limited numbers was the 1100S, with twin headlamps and a more powerful engine, used by the police and in motor racing. None are thought to survive.

The first Dacia 1300 left the assembly line ready for the 23 August parade in 1969, and was exhibited at the Paris and Bucharest shows of that year. Romanians were delighted with the modernity and reliability of the car, and waiting lists were always lengthy. As early as 1970, there were several variants: the standard 1300, the 1300L (for Lux) and the 1301 Lux Super, which had novelties such as a heated rear screen, a radio, windscreen mirrors on both sides and a more luxurious trim. This was reserved for the Communist Party nomenklatura.

Changes soon followed as export markets opened up. In 1973, the estate variant, Dacia 1300 Break, was produced. There were 1300F (estate with no rear seats, for carrying goods) and 1300S (ambulance) variants, and in 1975 the Dacia 1302 pick-up was developed. 1500 examples were made until 1983, the vast majority going to Algeria. Dacia also produced the D6, a CKD version of the Renault Estafette van, in limited numbers, but given the competition of the Bucharest-made T.V. van, numbers were very limited. In the very early 1980s, the Renault 20 was also assembled as the Dacia 2000; because of the exclusivity of this model numbers were always very limited. The 2000 was only available in dark blue or black, and was reserved for the Party elite.

In 1978 Renault's licence expired, and the 1300 was completely Romanian. Soon the designers began to explore new ways of improving the ageing design, for example introducing small rear indicators under the tail lights for the 1979 model year.. At the Bucharest show in 1979, the restyled 1310 models were presented. These had quad lamps at the front, larger lamps at the rear, re-profiled bumpers, and a new interior. The changes were heavily inspired by Renault's own restyling of its 12 in 1975. After a brief series of "crossover" cars in 1981 (for example, there were no more rectangular headlights available for the 1300, so the very last models used the quad lamps of the 1310), the 1310 finally hit the Romanian market in the autumn of 1981. In the UK, where it was known as the Dacia Denem, the top of the range model included such luxuries as a five-speed gearbox, alloy wheels and electric windows. The advertising slogan used for the car was "The Very Acceptable Dacia Denem", but this proved not to be the case with the British buyers, who increasingly opted for the more reliable Japanese, South Korean and Malaysian models. Sales were very limited, and the number surviving are not thought to exceed single figures, although the Romanian Embassy in South Kensington kept a fleet running until the mid-1990s. Sales of the pick-up version, known as the Shifter, continued until about 1990, and the Aro 10 was also sold as the Dacia Duster. The plug was pulled on the Denem, however, in early 1984.

At the same time the 1310 Sport was produced. At the 1979 show crowds admired the Braşovia, a prototype of a sports coupé based on the 1310 and developed at a service station in Braşov. The go-ahead was given for a prestige model, and so from 1983 the two-door Dacia Sport 1410 was available for the gilded youth of the period. These were very popular for rallies, and racing drivers such as Nicu Grigoraş tuned them to extract extraordinary power from the old Renault engine.

The 1980s
The designers were still coming up with fresh ideas, many of them shrouded in secrecy. Prototypes such as the 500cc Mini-Dacia, as well as Dacia 1310 variants, were designed; some, such as the extraordinary Dacia 1310 Limousine, are still on the road. These cars are eagerly prized by Dacia enthusiasts, and Dacia web forums are full of evidence about the rarities and oddities produced by Dacia during the 1980s.

In 1983, after the 1302 was dropped, the Dacia 1304 Pick-up and 1305 Drop-side models were introduced. These were a commercial success and remained in production, gradually being modified along with the rest of the range, until late 2006. From 1985, also, the 1410 was available as a larger-engined variant, while the relatively short-lived 1210 was the economy variant until about 1992.

In 1985, there were more slight modifications, with a new horizontal rear vent and chunkier, rubber mouldings around the front grille. Work was developing on the 1320 CN1 model, which was a hatchback based on the 1310. The new front end seen on the 1320 also appeared on the top-of-the-range models (known under Dacia brand nomenclature as MLS) from about 1987; these cars were distinguishable by two large headlights, a much plusher interior clad in blue plastic and known as the CN1 dashboard, and often a proliferation of aerials to indicate the owner's status. Most were owned by senior officials in the Communist Central Committee. While the 1320 was the most expensive model in the Dacia range when it appeared in 1988, most were used as taxis until the mid-1990s. The 1320 did not last long, however; as early as 1989 there were prototypes using the front of the 1320 and a new rear, with wrap-around tail lights and other modernities.

The last of the quad-lamped models were produced in 1992, and all the Dacia range received the new front end of the 1320, called CN1. An effort was made to rejuvenate the model range: the Sport was dropped, due to lack of sales, and new commercial vehicles were introduced. The 1307 was a double-cabbed pick-up; the 1309 was an estate with a tarpaulin instead of a boot; the car was a cross-over between estate and pick-up and sold very well on the Chinese market. There were also several prototypes:

the 1610 diesel estate, powered by Volkswagen, with about 150 units sold
the Dacia Star, with curved side windows
the 1308 Jumbo, a camper-van, and several attempts to give the 1310 a more modern look by grafting the front of contemporary cars such as the Nissan Primera onto it.
The cars of 1992–1994 are curiosities: although efforts were obviously being made to renew the model range, there were numerous stylistic hangovers from the quad-lamped models. Thus, the last of the 1983-designed dashboards were seen in 1994 although a new dashboard had been seen on some model ranges since 1987. Similarly, although the CN1 restylisation got rid of anachronisms such as a kink upwards at the C-pillar and a rubber rear spoiler, it was not applied consistently. One wonders about the techniques used on the production lines of the era.

The 1994 facelift was known within the industry as CN2. A reprojected front end was distinguished by a horizontal metal line in the grille. There were new headlamps, front and rear bumpers, and the shape of the front wings was accordingly different. Inside, there was a new dashboard for the base models, while the top-of-the-range cars had luxuries such as body-coloured bumpers, rear head restraints, a radio-cassette, hubcaps, and the ever-present CN1 dashboard, this time in black plastic. This model was not to stay in production for very long; in 1995 the CN3 type was introduced on the European market, followed by the Latin American market in 1996. Practically the only differences were those of trim level and the radiator grille.

From 1995 little attention was paid to the improvement of the 1310 range, as Dacia launched a new model, the Dacia Nova. This was a saloon or hatchback with a 3-box design. The design was rather outdated, owing to the fact that development work had started in 1982. Urban myth in Romania suggests that it was a version of the Renault 9 or the Peugeot 309; this is incorrect, as the Nova is a 100% Romanian design, started after the end of any French involvement in Dacia. The model was initially unpopular, due to reliability and rustproofing issues, one rumour suggesting that when it rained outside, it also rained inside. However, after improvements in 1997, the Nova became more often seen on Romanian roads. In 1998 a seven-seater prototype was produced using the panels and windows from the standard Nova saloon.

In 1998, the last restyling of the 1310 was introduced. It was known as CN4 and involved a comprehensive restyling of the front end, as well as new door handles and a lightly restyled interior mirror. The estate version was given larger tail lights. This restyling soon became popularly known as "zâmbetul lui Iliescu" (Iliescu's smile) after wits likened the front end to the presidential grin. The load-carrying models followed suit in 1999. It must be stressed that, even though the model was over thirty years old, it still sold exceptionally well due to a starting price of about 4200 Euros and high availability of parts. Goodies such as an engine with injection also helped keep the model relatively modern. By this stage the export market had all but petered out, although some saloons made their way to Latin America, and the utility models were available in countries such as Poland, the Ukraine, Germany and the Czech Republic.

In 2000, a special edition was produced for the first time; it was known as Dacia Dedicaţie. This luxury version of the saloon and estate had alloy wheels, body-coloured bumpers, power steering, electric windows, and a far better level of finish. The models were all painted two-tone silver, and sold at a significantly higher price. From after about 2000, also, the cars became known as Berlina and Break, with the 1310 lettering being relegated to an insignificant position underneath the side light. On July 21, 2004 the last models of the 1300 series rolled out the gates of the Mioveni production facility, just one month before their 35th anniversary. The very last Dacia 1310, number 1,979,730, will be kept in the Dacia museum. On 8 December 2006, the utility vehicles suffered the same fate. Although many improvements had been made in recent years, such as four-wheel drive, the introduction of a 1.9 diesel engine, the dashboard from the Dacia Solenza (also seen on the very last 1310s) and wheels fastened by five studs as opposed the archaic three, Romania's entry in the European Union effectively prevented the continued production of the old models. The assembly lines will be remodelled and expanded to increase production of the Dacia Logan.

In over thirty-four years of production, the Dacia 1300/1310 became easily the most numerous car on the Romanian roads. Almost everybody owned one and became adept at carrying out repairs or home-made modifications. For example, many older cars had newer front ends grafted onto them to make them seem more modern, or purely because newer parts were easier to get. Consequently, original early 1300s are quite rare, with prices steadily increasing for the best-preserved models. Tuning of Dacias is also a popular pastime, although the home-made nature of much of the work has implications for the quality of the finished product.

During the Communist era, in the plant where the Dacias were made, there were two assembly lines: one line producing Dacias intended for sale in Romania and the other line producing the same car (albeit from superior parts, and assembled with greater care) for export. It is common knowledge that many Romanians living near the Hungarian border purchased their Dacia in Hungary and drove it back home. 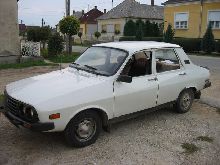 Suggest a link relating to Dacia