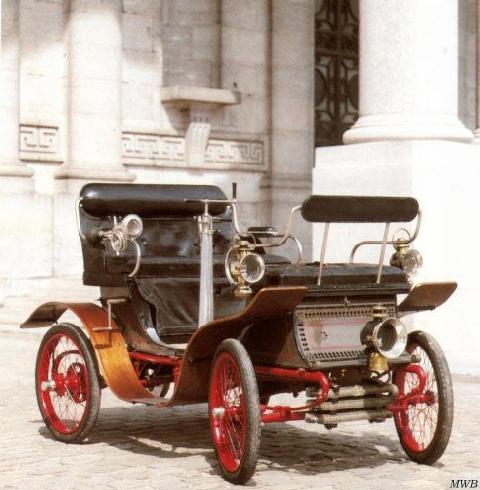 In 1883, Count Albert de Dion, Georges Bouton and his brother-in-law Trepardoux built a vehicle powered by a steam engine.  The three-wheeler had a top speed of almost 37 mph (60 kph).  Although the partners built steam cars until 1904, experiments were carried out with petrol engines as early as 1893.  In 1894, Trepardoux developed the famed De Dion rear axle.  But when a decision was made to switch to petrol engines for good, he left the company.  The smaller engines in particular brought the company international fame.  From 1896, these were used by more than 140 different car factories.  from 1902, the vehicles started to increasingly resemble real cars.  The engines were now placed in the front and the steering handle made way for a real, round steering wheel.  In 1914, the customer could choose from cars with various cylinder capacities.  The biggest engine had a capacity of 14.8 litres.  In 1923, the last of the cars with a V8 engine left the factory.  These made way for models with marvellous four-cylinder overhead-valve engines.  In 1930, the last passenger car left the Puteaux works.  Lorries were produced until 1950, when the company finally shut down for good.

When Count Albert De Dion (1856-1946) began making motor vehicles with Georges Bouton (1847-1938) and Charles Trépardoux in the 1880s he had clear objectives in mind: cars that were simple and reliable, with adequate performance, and inexpensive. Although some fine steam-powered vehicles were made, these fell short of the Count's ideals. However, once Bouton developed a high-speed internal combustion engine in 1895 the future was assured.

First from the Puteaux works came the mass-produced motor tricycles, then the famous and much copied four-wheeled vis-à-vis of 1899, whilst 'loose' engines were sold in their thousands to launch and sustain the businesses of hundreds of other motorcar manufacturers. The vis-à-vis met all De Dion's objectives. The only major change came in 1902 with the moving of the engine from the rear to under a front bonnet.

Early De Dion-Boutons are lively, light, and easy to drive. They sold in significant numbers for their day (over 2000 in 1902) and their high survival rate is a tribute to their quality, the engineering talent of Georges Bouton and the foresight of Count De Dion.