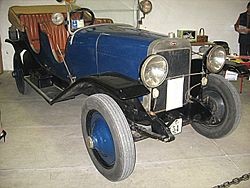 The 'Diatto-Clement Societa Anonima' was born in 1905 from an accord between Diatto (a Turin based company since 1835) and Clement (a Paris based company) in order to construct cars known as the 'Torino' at Turin. These were actually licenced products from the latter company.The first car was the 20-25HP which used a 3770cc four cylinder engine, followed the year after by the 10-12HP (1884cc two-cylinder) and the 14-18HP (2724cc four-cylinder). The success of these models led to more being introduced, including a six-cylinder model.

In 1909 Clement left the business and the company was renamed 'Societa Fonderie Officine Frejus'. The first real Diatto design appeared shortly afterwards, the 16/20. Production proceeded at around 250 to 300 cars per year. During the first world war new models continued to be introduced (the 18HP, 20-25HP and 30-40HP) as well as chassis' for light commercial vehicles for the military. An expansion program led to the purchase of various companies in and around Turin (including Scacchi, the builder of the Storero brand cars and Newton, builder of cars badged NB) whose experience, equipment and plans were all used by Diatto. A bodyshop was also founded for the internal production of the bodies.

After a brief name change in 1918, in 1919 the company became 'Societa Anonima Automobili Diatto'. Financial problems followed the war, but cars continued to be developed and produced. The Tipo 10 was a small car with a 1018cc four-cylinder engine, whilst the Tipo 30 was built under licence from Bugatti and included a four-valve-per-cylinder 1452cc four cylinder engine (later increased to 2-litres) with around 30bhp.

Following liquidation in 1923 a new company was formed in 1924 with new investors. The Tipo 20 family (20, 20A and 20S) was released, and a Grand Prix car was developed using a supercharged 2-litre dohc eight cylinder powerplant. Interestingly this car was originally designed by Giuseppe Coda and developed further by Alfieri Maserati. The economic situation at the time was, however, not to be denied another victim and in 1928 the last cars were produced. The company continued to produce some spare parts and components until the 1950s when it was totally absorbed into 'S.p.A. G. Veglio & C.'.

Suggest a link relating to Diatto