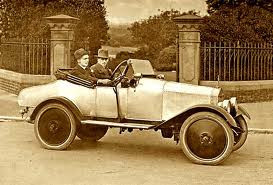 The Eric-Campbell was a British car made from 1919 to 1924. The company was formed by H Eric Orr-Ewing and Noel Campbell Macklin.

The car called the 10 (10/22 in 1924) was built in the factory of the Handley Page aircraft company in Cricklewood, North London. It was assembled from bought-in components with a Coventry-Simplex 1498 cc, four cylinder, side valve engine driving the rear wheels through a cone clutch and three speed Moss gearbox. The engine was tuned with a special camshaft and lightened pistons. Half elliptic leaf springs were fitted at the front whilst at the rear cantilever springing was used. Two seat polished aluminium bodies were fitted with a Rolls-Royce looking radiator. A top speed of 55 mph was guaranteed and 60 mph claimed as possible.

Macklin left the company in 1920 to concentrate on his Silver Hawk car and by 1921 Eric-Campbell were in financial difficulties. In 1922 production was taken over by Vulcan Iron Works. Prices were reduced and a wider range of bodies offered. In its last year of 1924, Anzani engines could be ordereded as well as the Coventry-Simplex.

The new owners failed to make a success of the company and the receivers were called in in January 1926.

It is estimated that as many as 500 cars might have been made.

Suggest a link relating to Eric-Campbell