FRAZER cars were the luxury range of the KAISER-FRAZER Corporation built at Willow Run, Michigan. Joseph W. Frazer was no stranger to the automobile industry, having been President of both Willys-Overland and Graham-Paige. The car that bore his name and its cheaper sister car, the Kaiser, had the same slab-sided bodies designed by Howard 'Dutch' Darrin and both were powered initially by a 3.7 litre Continental engine.

In 1947, the first 8,940 FRAZER sedans were built by Graham-Paige under a work sharing agreement with KAISER-FRAZER and carried the nameplate of that company.  Earlier cars had painted grilles. But the cost of producing the cars was more than Graham-Paige could deal with and they sold their interest to KAISER-FRAZER, who went on to build a further 27,180 cars with their own badge.

The Convertible sedan was a cut-down sedan, fitted with a heavily reinforced X-braced frame to stiffen the body. The side windows were fixed at all times.

The 1950 Manhattan sedan was the last FRAZER authorised by Joseph W. Frazer before he was replaced as President of KAISER-FRAZER by Edgar Kaiser after an argument with Henry Frazer regarding a cut back of production until the cars could have a facelift to compete with the big three American car producers.  Bodyshells were the same as the Standard sedan, but a new grille was fitted.

The 1951 Standard sedan was the basic model from 1950, but was given the same styling and level of trim as the 1951 Manhattan. The range included the unique 'Vagabond' utility sedan that offered a semi-station wagon based on a Standard sedan to cut-out further tooling costs. It was a carry-over from the 1949-1950 KAISER model with a double rear hatch and fold-down back seats that gave a nine feet long carrying platform.

The 1951 Manhattan was the last of the FRAZER cars and was re-styled from the windscreen forward by the company's own stylist Herb Weisinger, who also made a modification to the line of the body over the rear wheels. The Manhattan used up all the remaining convertible and hardtop bodies. General Motors Hydra-matic transmission was fitted as standard. 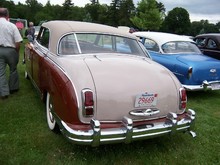 Suggest a link relating to Frazer