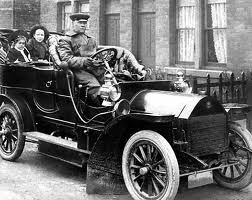 Two types of Globe vehicles were made.  One with a 9hp single-cylinder engine with variable-lift inlet valve, designed by Alfred Hitchon, and worm drive.  The other one was a tourer with 12hp 4-cylinder White & Poppe engine.  Not more than 12 were made of each type.  The cars sometimes went under the name Hitchon-Weller, as a partner was John Weller who had made the Weller at West Norwood and designed the Autocarrier which became the A.C.

Suggest a link relating to Globe