The company Goliath-Werke Borgward & Co. was created by Carl F. W. Borgward and Wilhelm Tecklenburg in 1928. The first models were three-wheeler trucks derived from the Blitzkarren previously built by Borgward. The first passenger car was the Goliath Pionier in 1931, which still had three wheels and a one-cylinder engine. Until 1934, 4000 of these small cars where produced in various types of body. The Pionier was considered as a forerunner of the Hansa models 400 and 500. 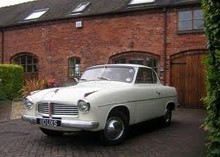 Suggest a link relating to Goliath