Italians Ettore Bugatti and Amadeo Gordini had a great impact on the history of the French car industry.  Gordini was born on 23 June 1899 in Bozzano near Bologna, the son of a horse trader.  On his twenty-fifth birthday, he moved to Paris, where he got a job with the importer of Hispano-Suiza.  Two years later, he started his own workshop.  He repaired Fiats and became increasingly interested in racing.  He participated in various rallies with tuned-up Fiats.  His cars often took part in the Le Mans and regularly won their class.  This did not bring in much money, however.

Gordini was therefore happy when he was able to conclude an agreement with Simca.  The most famous result of this was the renowned Simca-Gordini.  In 1938, no less than six Simca-Gordinis lined up for the start of the Le Mans race.  The 568 cc engine delivered some 26 bhp.  In 1957, Gordini joined Renault.  Gordini built all manner of cars, including even Grand Prix cars.  But it was primarily these expensive cars that were his ruination.  He could not compete with the much wealthier competition.  Gordini was finally forced to sell his company to Fritz Schlumpf.  He died a lonely death in Paris on 25 May 1979. 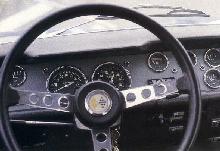 Suggest a link relating to Gordini