The Invacar Ltd (UK) was established in 1948 by Oscar Greeves after having built a 3-wheeler for his paralysed cousin, Derry Preston-Cobb. As a result of the many casualties from the Second World War Greeves realised the need for such transport to be widely available. After contacting the government they agreed to pay for the vehicles to be made of which sold in great numbers.

It is estimated there were approximately 1,300 Invacars in use around Britain in 2002 but on the 31st March 2003 the vehicles became illegal to own and illegal to drive on the British Highways*. Government service centres were busy crushing around 50 Invacars per month until they no longer existed. A few privately owned examples seemed to have escaped with a few finding their way into museums. The vehicle was replaced by the 4-wheeled, government approved 340cc Canta. 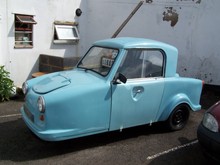 Suggest a link relating to Invacar