Virtually every independent car maker sucumbed to the might of the big three in Detroit.  Kaiser-Frazer are certainly no exception to this and were forced to close in 1954 after eight years in which losses of $100,000,000 were made for each year of operation.  And yet matters had begun so promisingly.

Henry J. Kaiser was born the son of a German immigrant in 1882 at Sprout Brooks, New York.  His foray into the automobile industry came after World War II when he decided to build cars with Joseph Washington Frazer.  Kaiser was new to the industry but Frazer had easily won his spurs.  He had worked for all the major automobile manufactures, ending up as President of Graham Paige.  The pair revealed their first prototypes at the Waldorf Astoria hotel in New York on 20 January 1946.  Three months later there were 266,849 people on the waiting list for one of the new cars.  The 100,000th car was supplied in September 1947.  The Kaiser Vagabond was an entirely new sedan with a rear window which could be lowered to form a fifth door.

When production in the USA closed down it was moved to Argentina where Kaisers where built for a time as Kaiser Carabela with a Willys engine.  Kaiser departed in 1955, aged 73, for Hawaii, where he built an hotel, cement works, radio station and hospital. 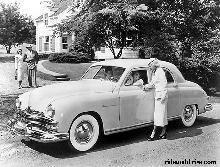 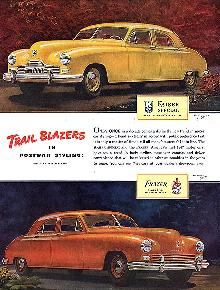 Suggest a link relating to Kaiser-Frazer