The demand for means of transport were greater in post-war Germany than ever before.  Cars had been left behind on the eastern front, motorcycles had been taken as booty and the trains did not run because of the widespread bomb damage.  It is little wonder then that do-it-yourself efforts at building small cars were undertaken.  The engineer Paul Kleinschnittger was on these hobbyists.  His "motorcycle with a fairing" made its first test run in 1947.  The car was powered by a 98 cc DKW RT motorcycle engine.  Even though the car was not fully enclosed there were still people standing in line to buy one.  Kleinshnittger found himself in 1949 both a financier and an assembly shop, where he could finally get to work.  His F125 now had a 123 cc Ilo motor which produced 5.5 bhp for the front wheels.  There were no doors and also no side windows.  Since the canvas hood did little to keep out the elements, most people left it at home.

History shows that cars constantly grew in size and the same is true of the Kleinschnittger.  Its creator of the same name designed a larger car with 250 cc engine which was due to go into production in 1957 but this never happened.  The time for midget cars was over and Kleinschnittger became bankrupt when the financiers turned off the money supply. 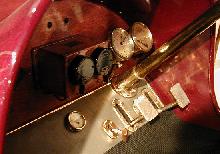 Suggest a link relating to Kleinschnittger