Lloyd Cars Limited (totally unrelated to the German car manufacturer of the same name) was founded by Roland Lloyd in 1936 in the most unlikely of automobile manufacturing areas - the fishing port of Grimsby.

The first Lloyd car was an ultra light open two seater priced at £75.  It was powered by a rear-mounted 347cc Villiers engine on a single backbone chassis which had independent suspension all round. A single chain drove the nearside rear wheel only.

It found favour with the Gas, Light and Coke company who bought ten of them for use by their inspectors.

Although far from pretty and looking decidedly 'home-spun', about 250 were made until 1939. A few were even exported to the Netherlands and South Africa.

WWII halted production and the company turned to making component parts for Rolls-Royce engines and Mosquito fighter bombers. This led to the factory being considerably increased in size.

The first post-war Lloyd prototype was built in 1945 and production started in 1946.

This was a much neater design than the pre-war car, but the lack of proprietary parts in favour of mostly 'in-house' manufactured components made the finished car very expensive.

In 1948, the two and four seater roadsters were priced at £480 at a time when a Ford Anglia saloon could be bought for just under £300.

The Lloyd 650 had a double backbone chassis frame and all round independent suspension. A transversely mounted 654cc two cylinder two-stroke engine, made by Lloyd, sat in the front of the car and drove the two front wheels.

Performance was less than impressive with a 0-40mph accereration time of 30.4 seconds and a top speed of only 47mph.

Despite this, the Lloyd was exported to Australia, Belgium, Denmark and India and a total just short of 400 cars were made before production ceased in May 1950, when mass-produced cars started to flood the market.

The company closed in 1983 and the premises were sold to Birds Eye-Walls who were already established next door with their frozen food business. 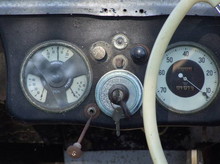