Francis Lombardi founded his coachbuilding company in 1947 and specialised in transforming small Fiats and some Lancia models.  Only two models could properly be called production cars as such.  The first was the 1969 Grand Prix based on Fiat 850 components.  It had handsome shark-nosed coupe styling that could seat two passengers, and was regarded as suitably sporting for several other manufacturers to fit their own engines and badges: Abarth (calling it the Scorpione), Giannini and O.T.A.S.  Lombardis's second sports car, the FL-1, launched in 1972, was a wedge-shaped 2-seater coupe with a mid-mounted Lancia engine (initially Flavia, then Beta 2000).  Lombardi closed its doors in 1974. 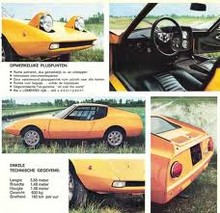 Suggest a link relating to Lombardi