Indianapolis owes its fame to its annual 500-mile race, held for the first time in 1911.  The winner Ray Harround drove a car built by Howard Marmon.  He was given $10,000 for this victory and this provided a great deal of free publicity for Marmon.

Howard Marmon studied at Berkeley University in California.  In 1902, the twenty-three year old engineer built his first car.  The Marmon company was situated on Kentucky Avenue in Indianapolis.  The cars were really something special.  The first cars were sold to friends and acquaintances, but the clientele soon grew.

In 1912, Marmon launched the Marmon 48, its first model with a water-cooled six-cylinder engine.  It was a large car with a 368cm wheel base.

Meanwhile, the company had become well-known as a manufacturer of luxury motorcars and cars in this price range were expected to have at least a six-cylinder engine.  The model 34 was introduced in 1916.  This car also had a six cylinder engine. 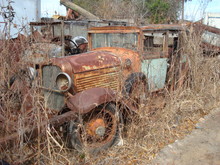 Suggest a link relating to Marmon