Merkur was an automobile brand which was briefly marketed by Ford Motor Company in the United States and Canada from 1985 to 1989. The brand made only two typesof  luxury cars (as a smaller companion to Lincoln's large luxury cars).

When the Merkur name was launched in North America, advertising and PR materials strongly urged the proper German pronunciation. Below the Merkur badge was a script stating FORD WERKE AG-Cologne, West Germany, indicating the car's place of manufacture.

Like the Capri before it, the Merkur was Ford's attempt at selling a European car in the North American market. However, Ford could not just import the cars and sell them; American government-mandated safety regulations dictated that Ford modify the design of the XR4Ti and Scorpio. This meant that the two cars were manufactured in Europe in a manner different from other European Fords. The XR4Ti was manufactured by Karmann in Rheine, Germany, with a turbocharged Ford Lima 2.3 L 4-cylinder engine from the Ford engine plant in Taubate, Brazil, and the Scorpio was manufactured in Ford's Cologne plant and fitted with the Cologne 2.9 L V6. 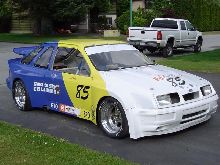 Suggest a link relating to Merkur