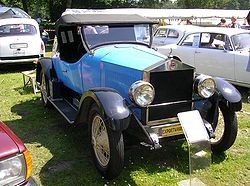 Moon Motor Car was a United States automobile company, in business c. 1905 - 1930. The company was based in St. Louis, Missouri. The company had a venerable reputation among the buying public, as it was known for fully assembled, easily affordable mid-level cars using high-quality parts. Often this meant the manufacturing process required more human intervention, leading to operating losses.

In addition to the Moon name, Moons were sold under the Hol-Tan name in 1908. Moon produced the Diana via its subsidiary the Diana Motors Company in 1925 - 1928. Another subsidiary produced the Windsor in 1929-1930.

The firm was also producing a cottonpicker built under contract from the American Cottonpicker Corporation.

Beginning in 1924, Moon was increasingly unable to meet dealership orders. The company went out of business at the start of the Great Depression; the Moon factory was purchased by Ruxton automobile.

Suggest a link relating to Moon