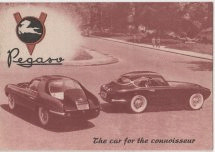 In 1946, the Hispano-Suiza factory was taken over by Empresa Nacional de Autocamions SA (ENASA), the Spanish national lorry manufacturing company.

In a complete breakaway from tradition, ENASA decided to try their hand at the limited production of a range of very expensive, very fast supercars.

Wilfredo Ricard, who had been responsible for some of the successful Alfa-Romeo racing cars prior to WWII was given the project and it was inevitable that many of the proven ideas would be inherent in the new car, making it a potential candidate for a sporting future.

Shown for the first time at the 1951 Paris Salon, the car's badge - also used on ENASA's commercial vehicles - featured Pegasus, the mythical flying horse and the name Pegaso took its place in motoring history.

The engine of 2,474cc was a ninety-degree V8 with dry sump lubrication and four overhead camshafts, driven through incredibly noisy gears. There was a choice of one, two or four double-barrel carburettors and a variety of compression ratio's to combat the very poor quality fuel available at that time.

Known as the Z102, the range comprised a glass-backed coupe, built by Pegaso themselves, possibly to a Saoutchik of Paris design, a 2-seater cabriolet by Saoutchik, plus a 2/3-seater berlinette and a 2-seater sports model by Superleggera Touring of Milan.

By 1953, the engine size had been increased to 2,816cc for the Pegaso Z102B and the exotic 'Thrill Berlinetta' by Superleggera Touring was added to the range.  This had aerodynamic side panels that blended from the rear body into the roof to form stabilising 'fins' on each side. It's unique red and black paintwork and polished spoked wheels made it the most beautiful and best known of all Pegaso's.

The introduction of the Z102SS was the debut of what was hoped would be a sporting future and it soon set a new, long-standing record for the Rambassada hillclimb. This was followed in 1953 by a simple open 2-seater, without any attempt at streamlining, covering the flying mile at 152mph in Belgium.

Two unusual 'twin-boom' supercharged Pegaso's were built - the driver sat on one side and the engine on the other - to race in the 1953 Le-Mans 24 hour race. But one of them crashed at speed during practice, killing the driver, Jover and the other car was withdrawn.

In 1954, a Pegaso, owned by the son of President Trujillo of Cuba, was entered in the grueling four day, 2,000 mile Carrera Panamerica road race. The driver, Joaquin Palacio - not exactly a driver of experience - had the car in second place when it was unavoidably involved in someone else's accident and was eliminated.

The Pegaso certainly had the ability to do well in competition, but the brakes were inadequate for the weight and power that the car possessed. Because it was so incredibly expensive and constantly dogged by misfortune, ENASA decided in 1958 to return to the sole manufacture of heavy vehicles, after producing only 125 cars. 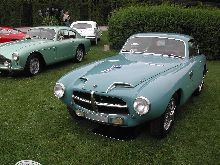 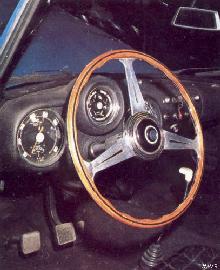 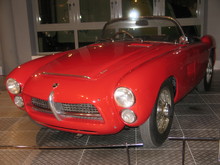 Suggest a link relating to Pegaso