The cars were very reliable.  At first the company manufactured small Voiturettes.  The factory on the Rue du Point du Jour in Billancourt initially manufactured licensed products by the English GN factory.  They had an air-cooled, two cylinder V engine with chain drive.  In 1921, after approximately 1600 cars had been sold, a new model by Henri Petit was launched.  The model was equipped with a 1987cc, four cylinder engine with overhead valves and had a top speed of approximately 44 mph (70 kph).  The car sold well.  a large number of races were won with this model, including the 24 hour Le Mans race in 1923 and the Targa Florio of 1926.  In 1927, Salmson stopped racing which was expensive.  From then on, the company concentrated on manufacturing small, two seater sports cars, but also built more deluxe models such as the 1932 Salmson S4.  The S4 with its 1296 cc engine had a top speed of 56 mph (90 kph) and a fuel consumption of 1:12.  In 1937, the S4 was succeeded by the S4-D4 which had a 1730 cc engine which delivered 48 bhp.  There was a no less than two year factory guarantee on the chassis and bodywork and the engine was also guaranteed.  The valves had to last at least 32,000 km and the pistons had to last at least 64,000 km.  The company failed to restart after the war.  The demand for expensive cars was still too low.  In 1955, the Salmson make was sold to Renault.  Once again a famous make had disappeared from the market. 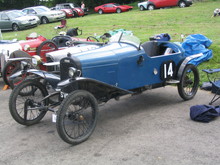 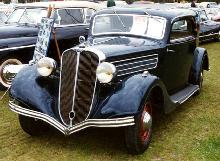 Suggest a link relating to Salmson