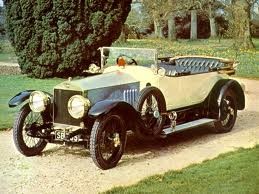 London car dealer Frederick William Berwick was keen to get into manufacture when he was put in touch with the brothers Georges and Maurice Sizaire, who had been forced out of the company they had founded, Sizaire-Naudin.

A factory was found at Courbevoie, where production would be supervised by Georges Sizaire, while design was by Maurice.  It was a conventional car with 4070cc 4-cylinder side valve engine, a 4-speed gearbox and a Rolls-Royce shaped radiator.

By the outbreak of war in August 1914, 139 Sizaire-Berwicks had been made, and they had acquired a good reputation, being said to be as smooth and silent as a 6-cylinder car.

In 1919 the British and French companies were separated:  Berwick made an enlarged version of the prewar car at Park Royal, while the French operation was taken over by an American called Burke.

By the end of 1922 all the original partners had left Sizaire-Berwick.  Maurice and Georges Sizaire made the Sizaire Frers car from 1923 and Berwick was involved with the Windsor.

Source: Nick Georgano - The Beaulieu Encyclopaedia of the Automobile

Suggest a link relating to Sizaire-Berwick