In 1898, carriage builder brother's Jacobus and Hendrick-Jan Spijker, based at Trompenburg delivered the Golden State Coach for the inauguration of Queen Wilhelmina.  That same year, they started building their first carriage fitted with an internal combustion engine.  In 1903 the brother's produced a 60HP in line six cylinder Grand Prix Racer that had permanent four wheel drive and was fitted with brakes on all four wheels.

New developments followed including a chassis with a 'dust shield' that made the car more popular in England and the Dutch East Indies.

To make their name easier to pronounce and remember and with international ambitions in mind, the brother's anglicised it to SPYKER.

International acclaim was bought to the brand when, in 1907, the French adventurer Charles Godard achieved second place in the Peking to Paris race in a 14/18HP Spyker that had only minor modifications.

During the first World War Spyker began building aeroplanes and from 1914 to 1919 they produced over one hundred fighters and two hundred aero engines.  After the war, they re-directed their efforts into car production.  Because of their involvement with both cars and aircraft, Spyker designed a badge for their cars that illustrates a spoked wheel with an aeroplane propeller superimposed horizontally across the centre.  The name 'SPYKER' is round the top face of the tyre and their motto 'NULLA TENACI INVIA EST VIA' (For the tenacious no road is impassable) is round the bottom.  This logo and motto are still used today.

The Spyker was known in England as the 'Rolls-Royce of the continent' and became recognised for its speed when, in 1922, racing driver S.F. Edge Breaks broke the double twelve speed record (24 hours in two 12 hour sessions) at Brooklands driving a standard Spyker C4 and reaching a speed of 119 km/hr,

From 1900 to 1925, Spyker produced more than 1500 cars, but the company went into liquidation in 1925.  After three quarters of a century, the Spyker name again entered the market with a hand-crafted new model called the Spyker C8 Spyder.  This was the realisation of a childhood dream of Maarten J. de Buijn when he and Victor R. Muller became partners and resurrected the Spyker name.  Since that time, Spyker cars have raced at Le-Mans with their Spyker C8 Double12 R (named after the car that broke the speed record at Brooklands in 1922) and tried their hand, albeit without success in formula 1.  The F1 cars were eventually sold and became known as 'Force India' for the 2008 season.

Spyker now have five hand-crafted models in their range and anyone placing an order with them will never hear the word 'No' to any detail concerning its construction.  Once the customer's wishes are known he can follow the creation of his car through a personal webcam. 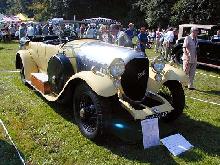 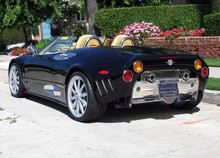 Suggest a link relating to Spyker