The Star Cycle Company of Wolverhampton was registered in December 1896 and despite a claim made by Star in 1930 that it had started making motorcars in 1897 there is no reliable evidence to support this view. The first recorded appearance of Star vehicles was at the Agricultural Hall Motor Show in July 1899 when a motor tricycle on "De Dion-lines" and a pair of "Star-Benz" motorcars were exhibited. As press reports implied, the cars were of the Benz pattern "but are throughout of English construction". A 6hp front-engined light car was offered in 1901, a two-cylinder 8hp "of the Panhard-type" was produced for 1902 and a similarly styled four-cylinder model was available the next year. For 1904 a 6hp 'Little Star' was introduced and this name was also applied to a popular 7hp two-cylinder version that unusually for a light car had side-chain drive.

Stars continued making cars whilst the names Starling, Stuart, and Briton were used for cars built by the parent firm or associated companies. 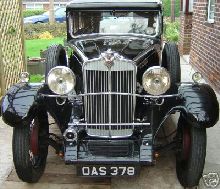 Suggest a link relating to Star