Henry C. Stutz was born on 12 September 1876.  In 1903, he moved to Indianapolis where he built racing cars in a small garage on Capital Avenue.  The company was first called the Stutz Autoparts Company, but was renamed the Stutz Car Company of America in 1913.  The Bearcat was powered by a six-cylinder, overhead valve engine, initially in a 5.4 and later in a 6.5 litre version.  Technically speaking Stutz's cars were ahead of their time.  The 1915 racing cars featured a four-cylinder engine with a single overhead camshaft and four valves per cylinder.

New models were regularly launched.  In 1923, the customer could chose from an open two-seater or a closed five-seater limousine.  The models were powered by a four or a six-cylinder engine.

Stutz was always an expensive car.  Due to the imminent depression production faltered as most customers could no longer afford an expensive car.  After the depression the company launched a model with a 4.0 litre, six-cylinder engine with an overhead camshaft.  Back then, the customer could also opt for an eight-cylinder, Continental engine.

When Cadillac, Lincoln and Packard presented their 12 or even 16 cylinder engines, Stutz had to lag behind: funds were not sufficient.  Instead, the existing eight-in-line engine was equipped with a new cylinder head with two overhead camshafts and four valves per cylinder.  This engine was built into the Stutz DV32 (Dual Valve = double the number of vales (32)).  This model saved the company's reputation.  Almost everyone who could afford a Stutz DV32 bought one.  The rolling chassis was provided with bodywork by various bodywork builders.

This meant the range featured 30 different body versions.  The Speedster was once again christened the Bearcat.  In spite of the enormous success, the company was forced to close in 1935. 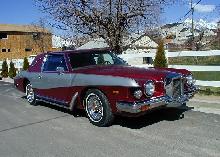 Suggest a link relating to Stutz