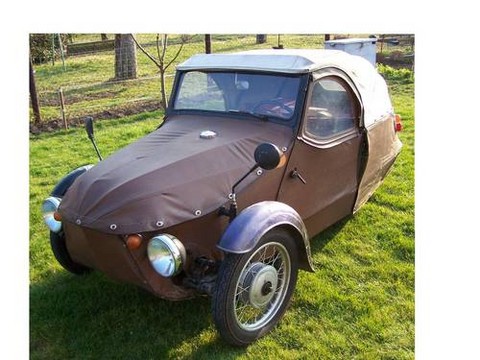 At first sight the Velorex suggests the result of a union between a frame tent and a flying helmet. Hailing from the Czechoslovakian town of Hradec Kralove, the car, which was produced between 1953 and 1971, was fitted with a rear-mounted Jawa two-stroke air-cooled motorcycle engine. Three engine sizes were used.

The 125cc and 250cc versions, whose engines were both single cylinder, had the motorcycle kick-starter converted for hand operation. The third type, the 250cc twin cylinders, had, in addition, an electrical starter and 12 volt electrics. Several components came courtesy of Skoda. Built on a frame of welded steel tubing, the Velorex's "bodywork" consists of vinyl stretched over the "cage". Fenders are metal. The car has four forward gears but, since the engine is able to run backwards, no conventional reverse gear is necessary and, in fact, four reverse speeds are available too. In 1959, a four-wheeled car was produced by the same team. It was not an adaptation of the Velorex, but a completely different design. Styling was more modern, a 350cc engine was fitted and many Skoda parts were used.

To reduce the productions costs they built their "Oskar" as a multi-tube structure covered in vinyl-like material called "Igelit", attached with turnbutton fasteners. Invalids received subsidies to buy these most primitive but well-liked vehicles, which enjoyed a very long production run.

Only 2500 of this model were produced.

Suggest a link relating to Velorex