The car industry has always had its remarkable figures and one of these was Gabriel Voisin.  During the First World War, Voisin had earned a fortune building over 10,000 aircraft for the French airforce.  Once the peace agreement had been signed, a new phase in his career started.  In 1919, he built his first car.  The aerodynamic bodies and almost silent sleeve-valve engines made his models striking.  The first type C1 Voisin from 1919, was actually designed by Citroen.  However, Citroen never took the model into production.  The car was powered by a 4.0 litre, four-cylinder, sleeve-valve engine and had a top speed of 75 mph (120 kph).  After 70 of these cars had been sold, the C2 was developed in 1920.  The hideously expensive Voisins were particularly popular with rich people.  In 1923, the company had no less than 68 kings, maharajahs, lords and sultans as its customers and film stars such as Rudolph Valentino also owned one or more Voisins.

Voisin also built various racing cars.  On 13 April 1927, a Voisin with an 8.0 litre, eight-cylinder, sleeve-valve engine broke the speed record over 160 km.  The car had a top speed of 128 mph (205.66 kph). During the drepression, the company rapidly nose-dived.  However, this did not mean that Voisin had given up hope.

On the contrary, he designed feats of technological prowess such as a five-cylinder, sleeve-valve engine with petrol injection, designed seven and nine-cylinder engines and various models with front-wheel drive.  In spite of his efforts, the board of directors switched to six-cylinder American Graham engines in 1938.  During the war Voisin worked for the Germans, but still had enough spare time to design a small passenger car.  This open two-seater had a single-cylinder engine and front-wheel drive.  After the war this midget was sold in Spain as the Bi-Scuter. 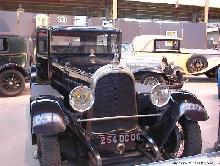 Suggest a link relating to Voisin