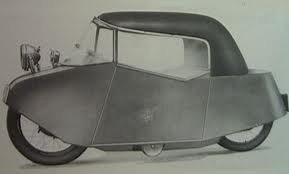 O.E.C. was a well known motorcycle manufacture who produced a 2-wheeled car.  The Whitwood was designed by an O.E.C. director, N.F. Wood and made in O.E.C's works.  It was a tandem 2-seater with the engine lying horizontally under the seat, and an all-enveloping plywood body and hood.  In 1935 came the Mk II with several important differences.  The engine was moved to the rear with the cylinder or cylinders lying alongside the wheel on the left, and pointing rearward.  Three engine options were listed, though whether all were used is not certain.  The Whitwood Monocar attracted a lot of attention at the Shows, but the public did not wave their cheques.  No more than half a dozen were made.

Suggest a link relating to Whitwood