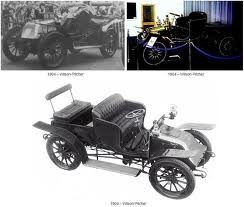 Designed by Walter G. Wilson and Percy Pilcher, this was an advanced car with horizontally opposed 4-cylinder engine with automatic inlet valves, an epicyclic constant-mesh gearbox which gave four forward and reverse speeds and a clutchless change, and shaft drive to a helical bevel rear axle.  Production began in 1904 and the 4-cylinder model was joined by a 4-litre 18/24hp flat-six on similar lines.  It was quite an expensive car at £900.  Wilson supervised the work, but the works manager favoured a more conventional vertical engine and started production of these from 1906, under the name Armstrong-Whitworth, although the Wilson-Pilcher was listed into 1907.

Suggest a link relating to Wilson-Pilcher