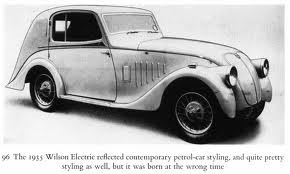 This company was known for producing electric milk floats, which they built from 1934 to 1954.  In 1935 they made an electric passenger car with a streamlined coupe with long bonnet which contained the 64-volt batteries.  This gave a range of 40 miles per charge and a top speed of 27mph.  The bodies were made by Arthur Mulliners of Northampton.  They were expensive at £385 and its no suprise no more than 40 were sold.  At least one Wilson Electrice survives today.

Suggest a link relating to Wilson/Partridge