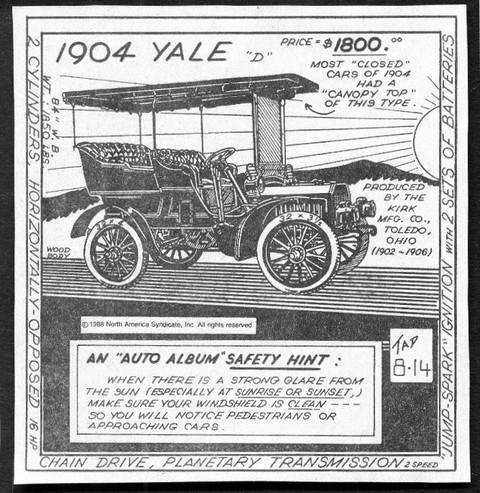 Cycle maker the Kirk Manufacturing Company of Toledo, Ohio, planned to begin making automobiles in 1899 but it was not until 1902 that this enterprise became reality. The first Yale was an orthodox American car of the period with a 10hp horizontally-opposed two-cylinder underfloor engine, planetary transmission, and central chain drive. It was though left-hand drive with wheel steering. Kirk claimed that it made the entire car apart from the differential and the lubricator. Over the next two years the engine output rose to 12 and then 16 horsepower whilst a four-cylinder model with a vertical front-mounted engine was introduced for 1905.

In 1903 Kirk had amalgamated with two other Toledo businesses to form the Consolidated Manufacturing Company but when it tried to sell the Yale automobile department there were no buyers and so it was closed down. This seems an odd decision, as Yale motorcars were reported to be popular in Toledo and its environs.

Suggest a link relating to Yale