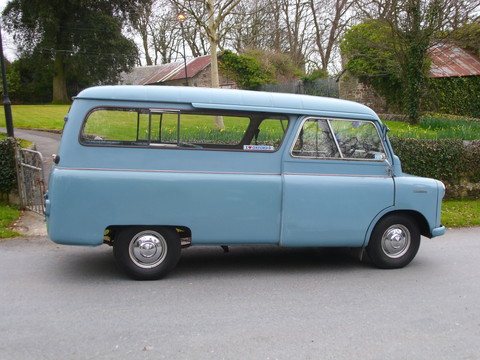 The Bedford CA was a distinctive pug-nosed vehicle produced between 1952 and 1969 by Vauxhall Motors, Luton, England.

It was manufactured in short-wheelbase and long-wheelbase forms, each form available in either a 10-12cwt or a 15cwt version.


Generally it was supplied as a light delivery van with sliding doors but it was also available as a chassis with cowl upon which specialist bodywork could be
added. The Bedford Dormobile was a Campervan conversion based on the Bedford CA van.

In its day, the vehicle was ubiquitous, the Ford Transit of its time. The van is a rare sight today, though you might occasionally see a battered Bedford Dormobile en-route to Glastonbury, Stonehenge or other outdoor summer events in the UK.

The vehicle was powered by a 4 cylinder in-line petrol engine with push rod operated overhead valves and a 3-bearing crankshaft. The fuel pump, oil pump and distributor were driven directly off the camshaft. A Zenith 34VN downdraught carburetter was fitted. The engine was available in either a low compression or a high compression version.

The engine extended back into the vehicles cabin and was covered by a cowling.  The vehicle thus had a very short bonnet, giving it its distinctive look. This configuration meant that the driver and passenger were travelling with their feet alongside the engine, but allowed a good proportion of the vehicle's overall length to be used for its payload. Access to the engine for routine checks was via the tiny bonnet flap or the interior cowl. For major overhaul of the engine, the front panel containing the headlights and grille and the chassis front crossmember had to be completely removed.

Have you any further information on this car?
Click here to tell us.
There are 30 further pictures
[View Full Gallery]
Related Contacts
[ suggest a contact ]
Related Links
[ suggest a link ]