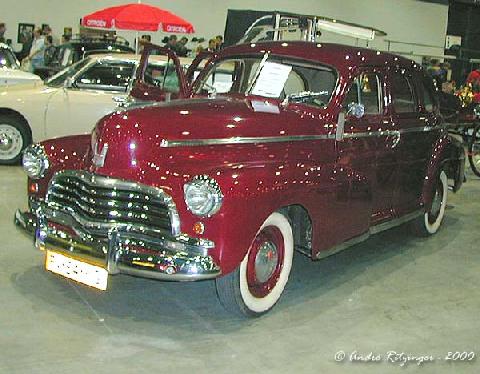 The first post-war Chevrolets exited the factory on 3 October 1945.  They looked identical to the 1941 models but had been given new names.  The 1941 Master range and Deluxe became the Stylemaster and Fleetmaster.

These cars still had six-cylinder overhead valve engines of 3.5 litres and because these cars were heavy four-door cars weighing 3,238 lb (1,472 kg), fuel consumption was of the order of 18 miles per gallon (1 litre per 6 km).  The cars were not changed in 1947 or 1948 because they sold like hot cakes.  The Stylemaster was the cheapest Chevrolet in 1948.  Under the bonnet was a 3,547 cc overhead valve engine which produced 91 bhp at 3,300 rpm.