The 202 was a coupe based on the D46 racecar spaceframe chassis. Suspension was basically Fiat 1100 parts, with a transverse leaf spring and lower wishbones at the front, with a live axle and longitudinal leaf springs at the rear. The engine was still the 1100 (1089cc) unit, but with various modifications (including two twin Webers and help from Carlo Abarth). Combined with a kerb weight of around 760kg the car was endowed with good performance. The body, a two seater coupe, was originally designed by Pinin Farina. It was reworked by Vignale (with only small detail changes being made such as a single piece windscreen, revised grille and larger bumpers) who then produced the production bodies.

Released to the world at the Italian Grand Prix in 1947, it immediately gained much admiration for its styling - including being displayed in the New York Museum of Modern Art.

1947 also saw the 202 MM (Mille Miglia) released. Designed by Vignale at Stabilimento Farina, it was a competition version of the standard car and led the Mille Miglia in that year (driven by Nuvolari) until problems forced him into second place (behind an 8C2900 Alfa Romeo !). Visually identifiable by having two small 'aeroscreens' and fins on the rear wings. It was popularly known as the 202 MM 'Nuvolari' after his Mille Miglia drive.

Spider variants were also made, designed by Vignale and called the 202SC they were built by various carozzeria with small detail differences. The coupe was known as the Gran Sport and was built from 1947 to 1952. Production was around 153 cars. 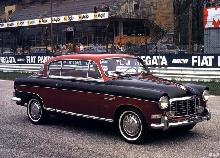 Suggest a link relating to Cisitalia 202