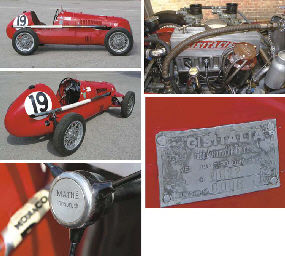 1946 saw the first car, the D46 completed. Designed by Giacosa it used a Fiat 1090cc engine with 65bhp, a tubular chassis and a three-speed semi-automatic transmission, the latter also designed by Giacosa. Aluminium drum brakes were fitted to all four wheels. The bodywork was in aluminium and made by Motto. With a wheelbase of 2008mm and tracks of 1220mm/1120mm (front/rear) it had a total weight of 350kg. Such a light weight enabled the D46 to reach over 170km/h.

This won its first race at Turin in Spetember 1946 (and also came second, third and fifth), and some backing was found for a one make series. This, however, did not last long before collapsing. Despite this several cars were sold and used by a variety of people in racing. About 40 cars built during 1946 and 47.
Source: Motorbase