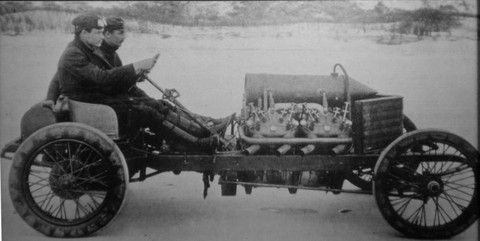 100 years ago, on 30th December 1905, a specially built V8 Darracq took to the long flat Arles-Salon road, just north of the Camargue, to set the first of many records: The World Land Speed Record at 109.65 mph. The car was immediately shipped to the USA where it took part in the famous Florida Speed Week, driven by none other than Louis Chevrolet. This beautiful old vehicle is under-going a complete restoration in the UK and is on schedule to be fired up in the Spring 2006. The car was on display at the
Goodwood Festival of Speed in 2005, this being the first time that it had been seen in public since 1909. It’s next public appearance will be in Paris at the Retro-mobile show from 10 –19th February 2006. A new website tells the story of this famous car and it’s record breaking history. For more information visit: http://www.isdm.co.uk/darracq/index.htm
Source: Motorbase
Have you any further information on this car?
Click here to tell us.
There are 3 further pictures
[View Full Gallery]
Related Contacts