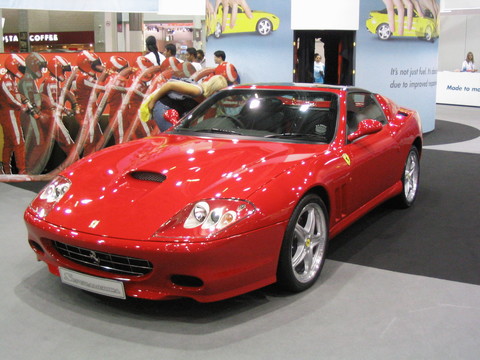 The 575 M Maranello is the latest model produced by Ferrari and is an evolutionary successor to the 550 Maranello.

It’s new code number, 575, refers to its increase in engine capacity from 5500 to around 5750 cc, which has resulted in increased power and torque.The letter "M" stands for "Modified," underlining the fact that every area of the model’s performance has been worked on. The most obvious change is the introduction of an F1 type gear change; the first time this has been used on a road going 12 cylinder Ferrari.

In terms of styling, it was decided to retain the balance and sober looks of the 550, which invested it with the status of an instant classic, fitting in perfectly with Ferrari’s return to a front-engined high performance car.

The principal modifications were limited to those required to deal with the technical changes: in particular different shape and size for the air intakes in the new front end of the car and a new treatment for the front spoiler. The headlights and wheels have also been modified.

The interior of the 575M Maranello has been extensively revised, in order to make it more sporty and functional. In keeping with the car’s increased performance, the aim has been to improve the efficiency of how the driver controls the car.

The optimum weight distribution, with a 50-50 split between the axles, with the driver on-board, has been achieved thanks to a transaxle design which features a combined rear mounted gearbox and differential unit with conical torque and autolocking differential in the same unit.

The transmission on the new 575M Maranello is also fitted with the electro-hydraulic "F1" control unit mounted at the rear of the car, in order to minimise response time and to ensure a favourable operating temperature.

The use of the F1 gearchange on the 575M Maranello has been developed specifically with the aim of reducing gearchange time and is integrated with the damping control, at the moment a gear is selected.

One of the factors which has the biggest impact on the car’s road-holding is the new adaptive set-up, based on a system of independently controlled damping at all four corners of the car.

The system is capable of selecting the ideal ride height for any condition, with two choices: Sport, which is selected for a more sporty ride, improving traction and Comfort, which gives a more comfortable ride, absorbing road bumps.

The braking has been modified to cope with the increased performance of the vehicle, especially in terms of avoiding fade and improving response under braking and the ABS/ASR system has been uprated from 5.0 to 5.3.

On the tyre front, the 575M Maranello is also fitted with electronic pressure checking, using sensors, which means that tyre pressures can be checked while the car is on the move.