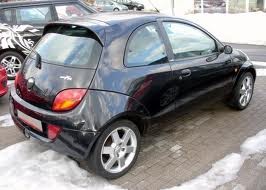 In 2003 the Ka brand was diversified, with the addition of a new SportKa featuring a sporty body kit, wider track with stiffened suspension and redesigned 16" alloy wheels. Both models came with slightly widened bumpers front and rear with integral fog lamps. A convertible model called StreetKa also appeared, launched with the help of pop singer Kylie Minogue.

The SportKa was noted for its surprising advertising campaign, "The Ka's Evil Twin", denouncing the Ka's traditionally perceived "cute" design.

StreetKa ceased to be officially on sale in late 2006.

A Ford KA rally championship was created in 1998  and has proved to be one of the most popular junior rally championships in Britain and Ireland. In 2007 Luke Pinder won the BRC Silverstone Tyre 1400 Championship in a Chris Birkbeck Ford KA.
Source: Motorbase
Have you any further information on this car?
Click here to tell us.
There are 2 further pictures
[View Full Gallery]
Related Contacts
[ suggest a contact ]
Related Links

Suggest a link relating to Ford StreetKa and Sportka