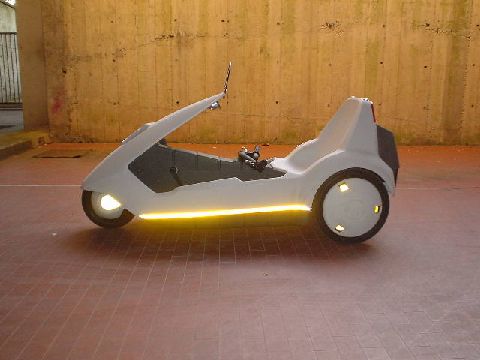 The Sinclair C5 was a battery electric vehicle invented by Sir Clive Sinclair and launched in the United Kingdom on 10 January 1985. The C5 took the form of a battery-assisted tricycle steered by handles on either side of the driver's seat. Powered operation was possible making it unnecessary for the driver to pedal.  It had a top speed of 15 miles per hour (24 km/h), chosen because vehicles unable to travel faster could be driven without a driving licence in the UK.

Despite being relatively cheap to purchase (it sold for £399 + £29 for delivery), the C5 quickly became an object of popular ridicule, and was a commercial disaster with only around 12,000 being sold.The popular press tore it  to shreds, claiming it was unsafe because of its low height, and should be banned. RoSPA liked it however, and offered an instruction booklet on the best way to drive it.  By summer of 1985, the price had dropped to just £199, and Sinclair Vehicles went into receivership later that year.

Have you any further information on this car?
Click here to tell us.
There are 3 further pictures
[View Full Gallery]
Related Contacts