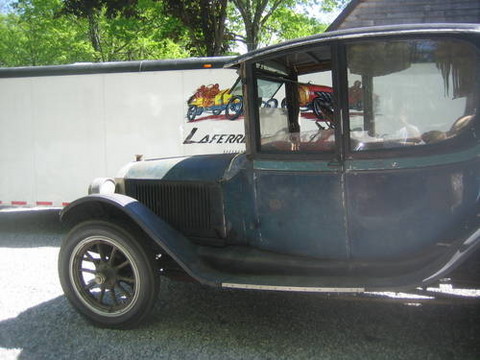 This car is a wonderful original example of an early marriage of chassis and body. The Condenser, hood and firewall are Stanley. The body and fenders are 1916 Woods Dual Power.  The car has a real character to it, and it seats two (with a jump seat for a third passenger).  The body is aluminum, fenders and hood steel.  25" wheels with 35 X 5 tyres.  Just look at the size of this car.

She's a runner with a forced air burner!  When you are ready to start the car, you get in and pump up your fuel pressure with the hand pump which simultaneously pumps water in the boiler (close valve if water not needed).  Once fuel pressure is up, you simply hit a switch on the column and your fired.  Three actions happen when that switch is turned on.  1) Blower motor kicks on, 2) Ignition source kicks on, 3) Magnetic solenoid releases the fuel to the burner...fuel under pressure from pumping.  Very similar to a home furnace.

There are a two pressure switches built into the system.  One of them assures that at least 60lbs of fuel pressure is at the pressure switch before allowing the 3 before mentioned actions to take place.  If not, nothing will happen.  This switch also comes in play when the boiler meets its desired pressure, adjusted and regulated by the steam automatic.  When the boiler reaches desired and set pressure, it drives a needle valve down into the fuel delivery system which in turn decreases fuel pressure to under 60lbs, which in turn shuts off the pressure switch which turns off the 3 before mentioned actions.  In theory, the same way an air compressor knows when to kick on and off. The second pressure switch kicks on and off an accessory fuel pump. For the lazy man, it keeps fuel pressure up when the car is not moving.

When the car is moving, three pumps in the pump box pump water, fuel and steam oil. These all function as they should. Also when moving, the battery charges from a modified early excited alternator, driven off the rear axle.

The next hurdle with this car is knowing how much water is in the boiler.
Source: Motorbase
Have you any further information on this car?
Click here to tell us.
There are 3 further pictures
[View Full Gallery]
Related Contacts
[ suggest a contact ]
Related Links