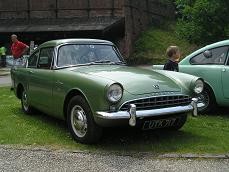 The Sunbeam Harrington Alpine Series D was made in two different versions. One was built on the Alpine Series 3 chassis and the other on Alpine Series IV chassis. The Series D was never officially introduced at any car show. The first one appeared in June 1963. One can believe that it took four months to make a new kind of mould because of the difference of the windshield angle between Alpine Series II and Alpine Series 3. Less than ten copies are known to have been built. The specifications are just like the ordinary Alpines. No tune up kits was available from the factory. It’s not known if any car did take part in any rallies in the sixties.