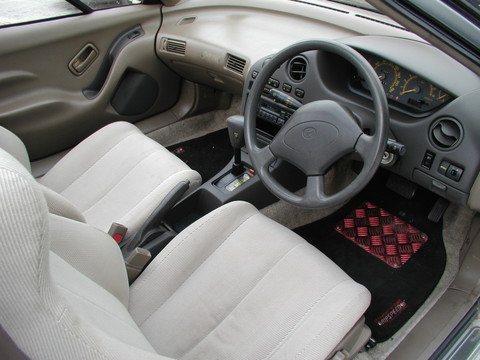 The Toyota Sera was a two door coupe (2+2) built by Toyota solely for the Japanese market in the early 1990s, although enthusiasts in New Zealand, Bangladesh, India, Ireland, Australia, Canada, and the UK have since imported some of them.  It was initially revealed as the Toyota AXV-II concept car in 1988, and was shown in almost production-ready form. The word Sera is a French word meaning "will be" which answers to the question why the car's design, shape and stock butterfly doors are so close to features of a concept car. The styling and layout of the car was actually beyond its time when it was actually put into production.

The Sera EXY-10 was available with a 1.5 L inline 4 engine. It came with either 4 speed automatic or a 5 speed manual transmission with Anti-Lock Braking system as an option. Only 15,852 units were made between 1990 to 1996 and therefore are now becoming rare collectibles. The car is related to the Toyota Paseo, and shares similar floorpans, suspension, steering and brakes.

Toyota Sera's most distinctive feature is its butterfly doors, which open forward and up from the bottom and top of the A pillar (similar to the McLaren F1 and Saleen S7). The weight of the door is supported by a thick gas strut, but there is a balance system to help take into account changes in temperature inside the door. The door can be opened fully in a fairly confined space - only 43 cm clearance on either side of the car is needed, unlike the conventional doors on most cars.

The Sera came with an optional 'Live' surround sound system that included a pair of component speakers on the rear parcel tray, mounted in a tube that could rotate towards the passengers or the glass hatch. This premium sound package also included a small subwoofer as well as a centre speaker in the dash and is usually identified as "Super Live Surround Sound" or SLSS.

One drawback of the car is the large amount of glass that can create a solar load greenhouse effect inside the car causing interior temperatures to rise. All Seras came as standard with air conditioning to offset this problem. The advantage to the glass design is that occupants have excellent all-round visibility in contrast to most small coupes. Due to the overwhelming amount of glass, the vehicle body is not very rigid. This lack of rigidity affects the handling characteristics with body roll, although some of this behaviour can often be attributed to the age of the cars — a new original suspension is actually quite competent, although still somewhat at odds with the sporting image the car has acquired outside of Japan. Another disappointing feature is the small opening for the rear cargo area: measuring only 52 cm by 82 cm. This boot (trunk) space is large enough to fit a small suitcase, but the rear seats fold down to increase storage area to an acceptable level, and the division between the rear seats and luggage area is removable. Ultimately the Sera is a practical design given its compact size.

The Toyota Sera was produced in three distinct versions, each available with either manual or automatic transmissions, standard (two speakers, fitted to the doors) or SLSS audio, and a wide range of options. The factory SLSS system (Super Live Surround Sound) had a DSP system with 10 speakers: Front cone x 2 (10cm, IIRC), Front Tweeter x 2, Centre Speaker (10 cm again), rear cones and tweeters in a stylish tube on the parcel shelf at the rear which could be rotated to reflect off the rear window or aim directly into the car, along with a rear subwoofer of adequate capability.


Source: Motorbase
Have you any further information on this car?
Click here to tell us.
There are 17 further pictures
[View Full Gallery]
Related Contacts
[ suggest a contact ]
Related Links