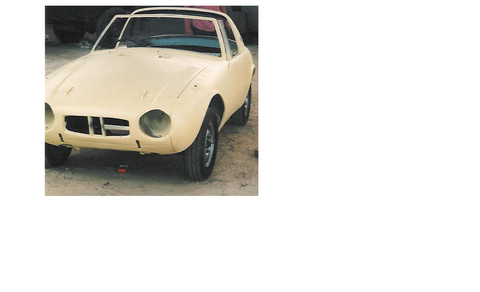 The Toyota Sports 800 was Toyota Motor Corporation's first production sports car. The prototype for the Sports 800, called the Toyota Publica Sports, debuted at the 1962 Tokyo Auto Show, featuring a space age sliding canopy and utilizing the 28 hp (21 kW) power train of the Toyota Publica 700, a Japanese market economy car. The Toyota Sports 800 is affectionately called the "Yota-Hachi", which is a Japanese short form for "Toyota 8".

The car had aerodynamic styling by Shozo Sato, a designer on loan from Datsun, and Toyota engineer Tatsuo Hasegawa. Hasegawa had been an aircraft designer in World War II and the resulting Sports 800 was a lightweight and agile machine.

The Sports 800 was one of the first production cars featuring a lift-out roof panel, or targa top, pre-dating the Porsche Targa. The aluminum targa top could be stored in the trunk, when not in use.

The vast majority of the 3,131 cars were right hand drive, but some 300 were left hand drive models, built primarily for the Okinawa market. (Okinawa, having been American occupied, drove on the "other side" from the rest of Japan.) A very limited number of left hand drive cars were used by Toyota to "test drive" in the US, but Toyota made a decision not to import or sell the cars in the US market.

There are subtle design differences between the years. Noticeable differences have included: change over from non-synchro to synchro first gear in 1967; a grill and bumperette change in 1968; and side marker lights in 1969. The basic body design, however, remained unchanged.

Weight was kept down by using aluminum on selected body panels and thin steel on the unibody construction. For the first few years of production even the seat frames were made of aluminum. Curb weight is 580 kg.

There are both Japanese and American Registries on the Internet. Owners are encouraged to register their vehicles.

Have you any further information on this car?
Click here to tell us.
There are 13 further pictures
[View Full Gallery]
Related Contacts
[ suggest a contact ]
Related Links
[ suggest a link ]