The Vauxhall Victor was a medium/large model of automobile produced by Vauxhall Motors, the British subsidiary of General Motors from 1957 to 1976. The car was the smaller of two new models from Vauxhall to replace the outgoing Wyvern model, the larger one being the Vauxhall Cresta PA. It was renamed as the VX Series and continued until 1978, when it was replaced by the Carlton, which was based on the German Opel Rekord D. The last model was manufactured under licence by Hindustan Motors in India as the Hindustan Contessa, during the 1980s and early 1990s, with an Isuzu engine.

The original Victor was the first European car to use the panoramic windscreen, and for a time was Britain's most exported car, with worldwide sales in markets as far flung as the United States (sold by Pontiac dealers, as Vauxhall had been part of GM since 1925), Canada, Australia, New Zealand, South Africa and Asian right hand drive markets such as Ceylon (now Sri Lanka), India, Pakistan, Malaysia, Thailand and Singapore.

In Canada, it was marketed as both the Vauxhall Victor (sold through Pontiac dealerships) and Envoy (marketed through Chevrolet, Oldsmobile and Buick dealers). The Victor was also instrumental in giving Vauxhall its first in-house designed estate car, which complemented the four door saloon.

The original Victor (1957-1961) was dubbed the F series and saw a production run totalling over 390,000 units. The car was of unitary construction and featured a large glass area with heavily curved windscreen and rear window. Following then current American styling trends, the windscreen pillars sloped backwards. Bench seats were fitted front and rear trimmed in Rayon and "Elastofab" and two colour interior trim was standard. The Super model had extra chrome trim, notably around the windows, the exhaust pipe coming through the rear bumper, arm rests on the doors, door operated courtesy lights, a two spoke steering wheel and twin sun visors. An estate variant was launched in 1958

Although the engine was of similar size to that of the outgoing Wyvern it was actually new. Fitted with a single Zenith carburettor it had an output of 55 bhp (41 kW) at 4200 rpm and gained a reputation of giving a long trouble free life. The three speed gearbox had synchromesh on all forward ratios and was operated by a column mounted lever. In early 1958 Newtondrive two pedal control was available as an option.

Suspension was independent at the front by coil springs and with an anti-roll bar was fitted on a rubber mounted cross member. The rear suspension used a live axle and semi elliptic leaf springs. Steering was of the recirculating ball type. Lockheed hydraulic 8 in (203 mm) drum brakes were used.

A Series II model was announced in 1959 with simplified styling. The new car was available in three versions with a De-Luxe as the top model featuring leather trim and separate front seats. 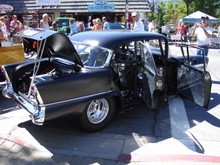 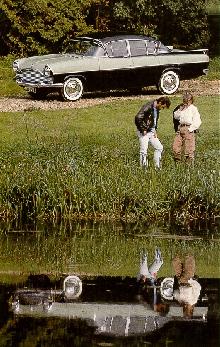